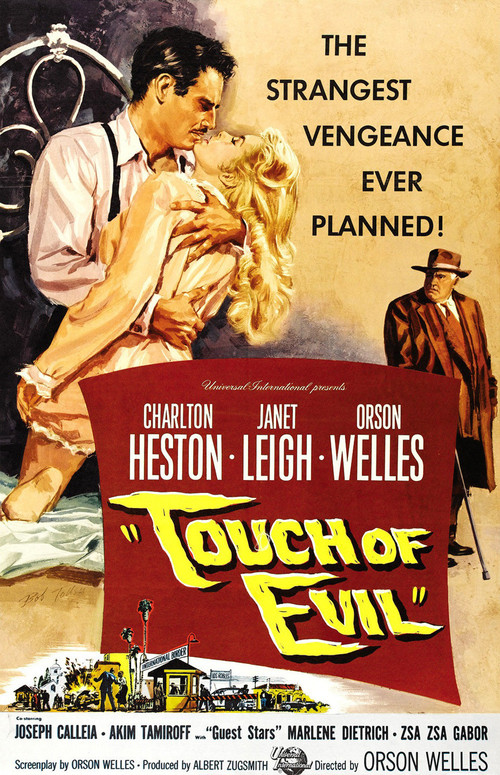 Orson Welles's late noir entry starts with a suspicious killing in a seedy border town, pitting honest Mexican investigator Mike Vargas (Heston) against bigoted, corrupt American cop Hank Quinlan (Welles). Quinlan, who claims jurisdiction, has no intention of probing into the mystery, quickly finding a young Mexican man to serve as scapegoat. Vargas senses a cover-up and begins snooping on his own, placing him and his wife Susie (Leigh) in jeopardy. Will Mike and his bride live long enough to unravel the conspiracy?

The director's original version is restored for the 50th Anniversary Edition DVD, to powerful effect. Welles creates a desolate night-time world in the dirty town of Los Robles, a forgotten speck on the map where everyone seems to carry a nasty secret. A lurid, almost surreal atmosphere is complemented by uniformly first-rate performances, with Heston and Leigh never better, Welles himself a bloated symbol of moral decay, and Akim Tamiroff memorably slimy as a local crime boss. Don't miss Dietrich playing a gypsy — as you might guess, she gets the final word. A cult movie with a capital "C."