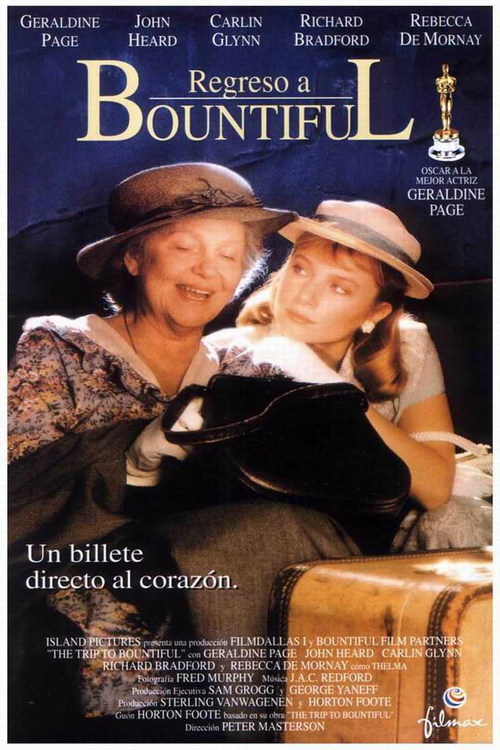 The Trip to Bountiful

In 1947 Houston, elderly Mrs. Watts (Page) wants nothing more than to escape the claustrophobic life she shares with her callow son (Heard) and obnoxious daughter-in-law (Glynn) and return to her beloved hometown of Bountiful before she passes away. After discreetly hopping a bus, she makes the acquaintance of attractive young Thelma (De Mornay), who proves to be a most pleasant traveling companion. But just 12 miles from her destination, a sheriff (Bradford) appears, and announces he’ll be escorting Mrs. Watts back home. Will she ever make it to Bountiful?

Geraldine Page’s Oscar-winning turn as an elderly woman determined to visit her hometown one last time makes this bittersweet emotional journey well worth taking. Playwright Horton Foote, who was also nominated for an Oscar, laces this multi-layered teleplay with rich homespun humor and poignant touches. The beautiful De Mornay also shines in a change of pace role as the innocent, openhearted Thelma. A gracefully told story about aging, nostalgic longing for better times, and making peace with the past, “Bountiful” is a truly joyous adventure.

The Triplets of Belleville