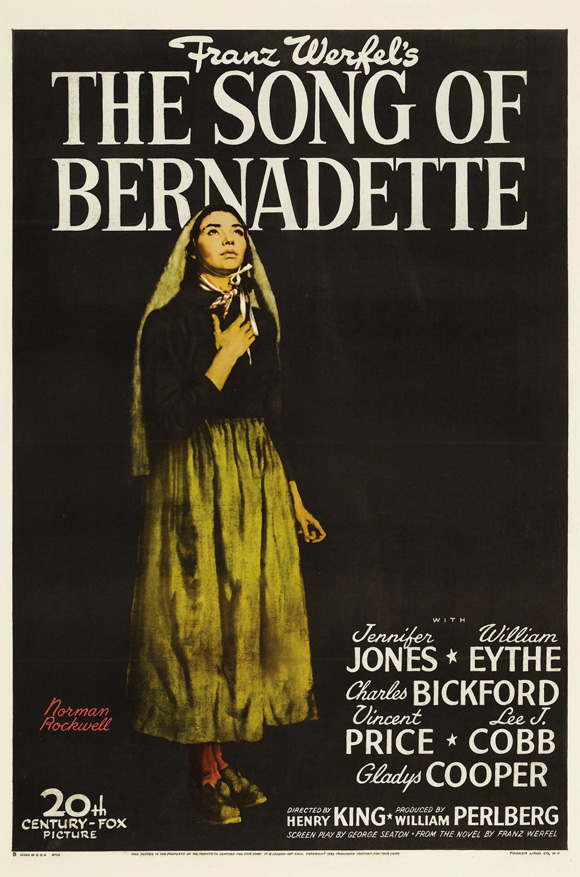 The Song of Bernadette

In 1858, frail French peasant girl Bernadette Soubirous (Jones) ventures into a grotto one day near the town of Lourdes and has a healing encounter with a beautiful lady. While some believe Bernadette has had a vision of the Virgin Mary, local officials like mayor Lacade (Mather) and no-nonsense attorney M. Dutour (Price) heap scorn on the simple young woman. But Bernadette's piety and evident sincerity begin to melt the hostility of Father Peyramale (Bickford), the Catholic Dean who comes to believe in the miracles that result from this mystical meeting.

With reverence and respect, director Henry King recounts the details of the Lourdes legend, in which the Virgin (played here by an uncredited Linda Darnell) is said to have appeared to the simple, uneducated Bernadette, through whom she conveyed her message of love. The story is treated as fact, depicting Bernadette's divine encounters as wholly natural rather than fantastic. Jones is radiant as the scapegoated Bernadette, winning an Oscar for her efforts. Price is wonderful, too, as the withering voice of reason. If you're in need of some heavenly grace, lay hands on the ecstatic "Song."

The Sorrow and the Pity