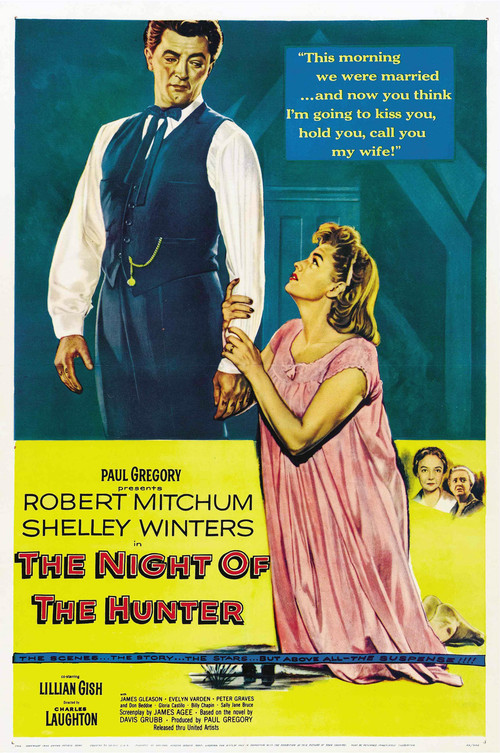 The Night of the Hunter

Ben Harper (Graves) hides away $10,000 that he stole during a bank robbery, only revealing its location to his small children John and Pearl (Chapin and Sally Jane Bruce). Eventually caught, Ben is sentenced to death, since two men were killed during the robbery. Ben's prison cellmate is Harry Powell (Mitchum), a psychopathic self-appointed preacher, who encourages Ben to disclose where the money is before meeting his maker. Failing to do so, on his own release Harry seeks out Ben's family, including his widow Willa (Winters) and the two kids. As to locating that cash, this time Harry won't take "no" for an answer.

This Gothic suspense/horror entry was actor Charles Laughton's only outing behind the camera, and he was heart-broken when it failed at the box office. Evidently, the film was simply too dark for audiences of the time. Mitchum is terrifying as Preacher Harry, a wolf in sheep's clothing who has the word "Love" tattooed across the knuckles of one hand, "Hate" on the other. Winters is ideally cast as the dim Willa, but the stand-out is silent actress Lillian Gish as gun-toting Rachel Cooper, the kids' unlikely eventual protector. Eerily composed and shot, and featuring a brilliant screenplay by James Agee, "Hunter" remains a spine-chilling masterpiece.

The Night of the Shooting Stars