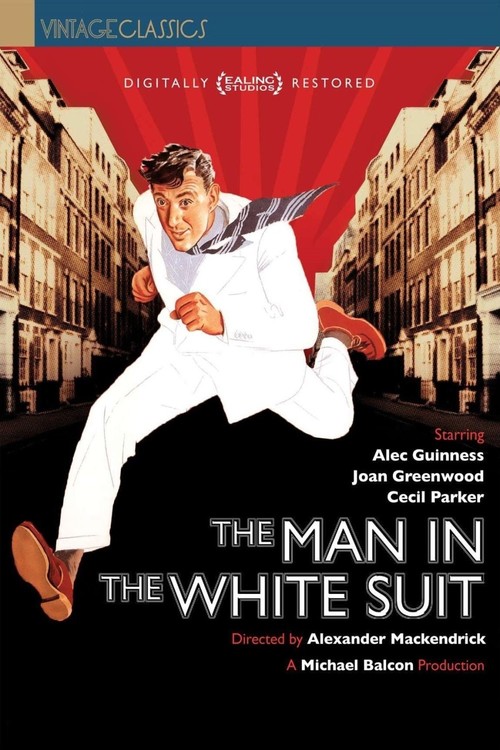 The Man in the White Suit

After he's booted from a job at a textile factory for conducting an unauthorized (and costly!) experiment in the research lab, amateur scientist Sidney Stratton (Guinness) finesses his way into the lab of rich competitor Alan Bimley (Parker). With the help of Bimley's comely daughter Daphne (Greenwood), Sidney manages to continue his experiments, and invents a miracle white fabric that never stains and lasts forever. But the unions and industrialists aren't too happy with the implications of a product that never needs to be replaced.

One of the snappier satires to emerge from Britain's Ealing Studios in the 1950s, Mackendrick's wry, wonderful "White Suit" is built around the expressive comic performance of Guinness, playing a dreamy, obsessive chemist without the means (or the elite credentials) to fund his pet project. Greenwood, always a fine mix of dotty and genteel, is a lovely, airy presence as Sidney's champion, and the cast of eccentric Ealing character actors (like wheezing elder Ernest Thesiger) is top notch as well. Mackendrick slyly incorporates a bit of political commentary into this seemingly frivolous farce, poking fun at the machinations of industrial tycoons and union activists alike. Buoyant and funny, this "White Suit" wears exceedingly well.

The Man with the Golden Arm