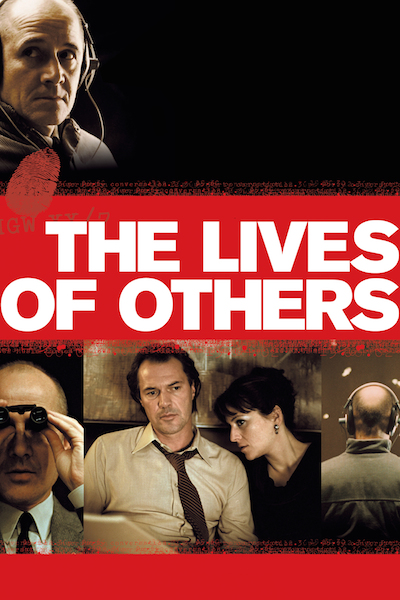 The Lives of Others

After seeing a stage drama by celebrated East German playwright Georg Dreyman (Sebastian Koch), Stasi (State Security) Capt. Gerd Wiesler (Ulrich Muhe) places the writer under surveillance at the suggestion of a government minister who privately lusts after Dreyman’s lover, Christa-Maria (Martina Gedeck).  Wiesler quickly learns that Dreyman is patriotic, but as the GDR begins to crack down on his artist friends, his loyalties begin to shift – and astonishingly, so do Wiesler’s.

Winner of the Best Foreign Language Oscar, this elegantly plotted political thriller concerns a highly disciplined agent of the East German secret police who becomes emotionally involved in the life of one suspected dissident – though they never meet. In a stoic, tight-lipped performance, Muhe is note-perfect as the cold, unhappy policeman who experiences a personal catharsis after monitoring Dreyman.  Koch and Gedeck shine too as a couple doomed to suffer at the hands of abusive officials.  Suspenseful and moving, “Others” is an aching tribute to obstructed love, and those individual rights of privacy we too often take for granted in this country – but more than ever, shouldn’t.