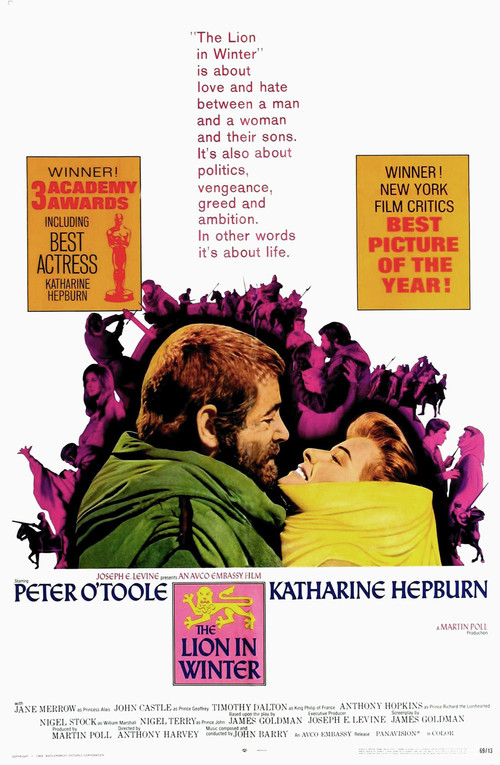 The Lion in Winter

Hoping to retain his grip on power, 12th-century King Henry II (O'Toole) summons his estranged, exiled wife, Eleanor of Aquitaine (Hepburn), for a Christmas Eve meeting with their three sons, Richard the Lion-Hearted (Hopkins), Prince Geoffrey (Castle), and Prince John (Terry), to determine who will succeed to the throne. As Henry and Eleanor lock in a vicious battle of words, the remaining family members — including Henry's mistress Alais (Merrow) and her teenage brother King Philip of France (Dalton) — try to outmaneuver each other in their quest for dominance.

Shot on location in France and the British Isles, and based on an excoriating play by James Goldman, "Lion" is a wit-fueled, magnificently acted parable of power-lust and extreme family dysfunction. O'Toole and Oscar winner Hepburn are superb as the grizzled, sarcastic regent and his cunning wife, locked in a never-ending exchange of venomous criticisms. A youthful Anthony Hopkins, in a spirited turn, pops off some of the best insults. Aside from the endless machinations of various family members, Harvey adds period flavor with authentic costumes and gloomy, tone-perfect settings. When this "Lion" roars, you'll be hooked.