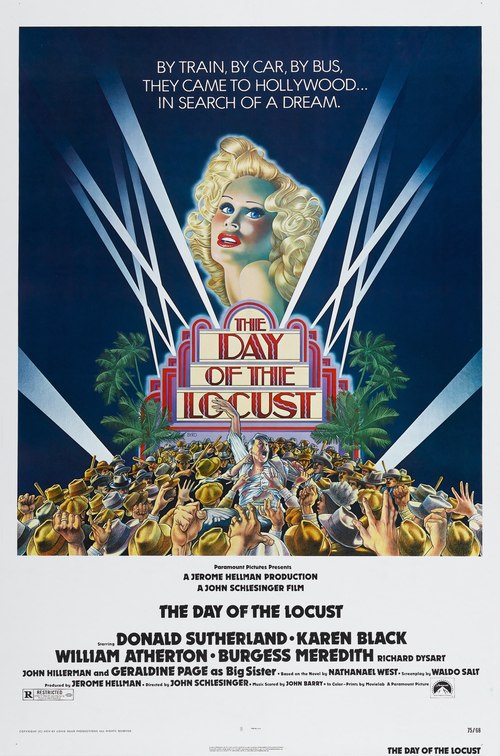 The Day of the Locust

Aspiring set designer Tod Hackett (Atherton) moves to glitzy Hollywood in the 1930s and takes a romantic interest in his new neighbor, Faye Greener (Black), a talentless actress who lives with her sickly, drunken father Harry (Meredith), a onetime vaudevillian. Dreaming big despite her chronic failure at auditions, Faye flirts with Tod but opts to move in with a lonely, repressed accountant, amusingly named Homer Simpson (Sutherland). Little by little, Tod finds himself immersed in a sleazy, corrosive world of cruelty, false hope, and malignant desperation.

A blistering adaptation of Nathanael West's novel, "Locust" might be the most audaciously cynical movie ever made about Tinseltown. Peopled with deranged healers, petulant dwarves, painted child stars, and washed-up never-weres, Schlesinger's film creates a stark divide between the pampered starlets and studio bosses of La La Land and the impoverished hangers-on and wannabes whose crushed desires fuel their fortunes. Black, Sutherland, and Meredith are mesmerizing in their respective roles, playing fringe types with the utmost authenticity. By the time the film's cathartic, apocalyptic finale arrives to resolve all the dramatic and sexual tension, Hollywood has already begun to look more like hell than any place on earth.

The Day the Earth Caught Fire