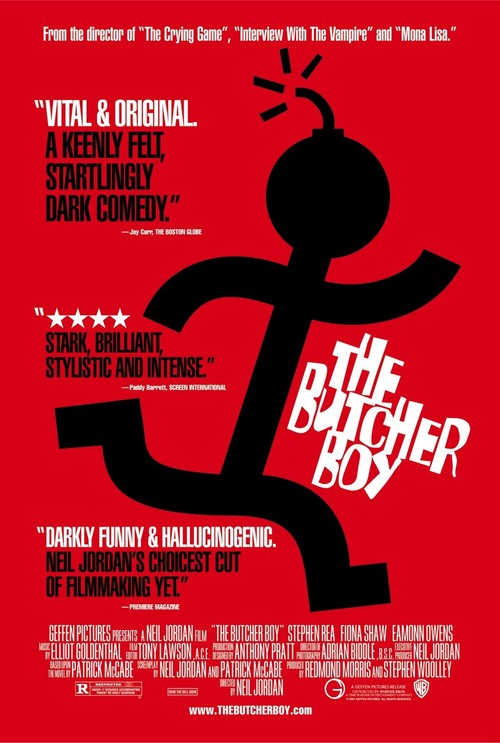 Growing up in Dublin in the early '60s, Francie Brady (Owens) is an Irish lad with a rich, dark fantasy life which allows him to cope with the most dysfunctional of circumstances, including an alcoholic father (Rea) and a suicidal mother (O'Sullivan). Branded a pig by nosy neighbor Mrs. Nugent (Shaw), Francie hurls stinging insults and megalomaniacal one-liners with great charisma. But as his pranks and delusions turn increasingly violent and deranged, and his only bosom pal Joe (Boyle) deserts him, Francie becomes a dangerous menace to everyone in his path.

Based on the novel by Patrick McCabe, "Butcher Boy" is the blackest of black comedies, and unlike anything you've seen. Stephen Rea is effective as always playing Francie's drunken father, but it's Eamonn Owens's stunning portrayal of one very troubled kid that stays with you. (Owens was plucked out of 2,000 child actors to assume the role.) Though the film is undeniably bleak, Jordan's magic camera and storytelling gifts transcend this darkest of subjects, creating a strangely hypnotic work offering unexpected rewards.

The Cabinet of Dr. Caligari