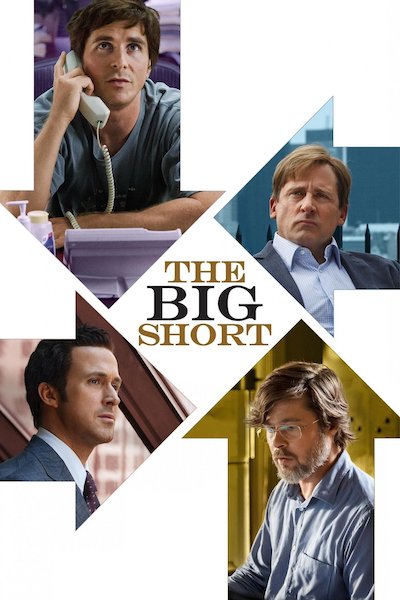 In 2005 hedge fund manager Michael Burry (Bale) predicts a market crash due to the housing bubble caused by subprime loans, and he bets against the market, infuriating his bosses and many of his investors. Meanwhile, trader Jared Vennett (Gosling) finally convinces big wheel Mark Baum (Carell) that risky loans are being bundled into Collateralized Debt Obligation assets, and given faulty AAA ratings. Knowing that this fraud could precipitate the collapse of the global economy, these men nevertheless stand to profit from their knowledge, making millions out of the impending disaster.

Brad Pitt’s company Plan B produced this ingenious dramedy from a book by Michael Lewis about the financial crisis of 2007-2008. Comedy director McKay makes his first foray into more serious subject matter, but lightens the jargon-heavy script with trippy cameos from the likes of Robbie and Bourdain, who help explain the unfathomable goings-on. Nominated for five Oscars, and winning for  McKay and Charles Randolph’s crackerjack screenplay, this fast-paced drama features outstanding performances from its AAA rated cast. By all means, invest in this film.