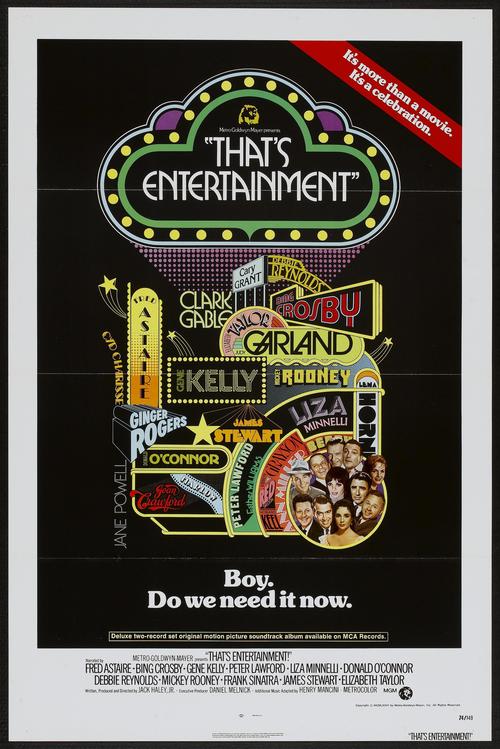 Director Haley (yes, son of the original Tin Man!) compiles highlights from MGM musicals during the studio's golden age, and has them introduced by a who's who of classic Hollywood: Fred Astaire, Bing Crosby, Frank Sinatra, Liza Minnelli, Gene Kelly, Elizabeth Taylor, and many more. You'll delight to song-and-dance clips from "The Wizard of Oz," "An American in Paris," "Singin' in the Rain," and countless other triumphs of tune-filled celluloid sensation. What's not to love?

What makes this dizzying whirl of spectacular montages so much fun is the mix of famous sequences with colorful lesser-known bits, like Clark Gable's rendition of "Puttin' on the Ritz," Jimmy Stewart's wobbly serenade in "Easy to Love," and Jean Harlow vamping up "Reckless." Narrated by a roster of screen legends, this magnificent homage to the big-budget musicals of yesteryear was a surprise box-office hit for MGM in 1974, and led to two sequels (also worthwhile). Pure movie magic from start to finish, "That's Entertainment!" will sweep you off your feet.

The 36th Chamber of Shaolin