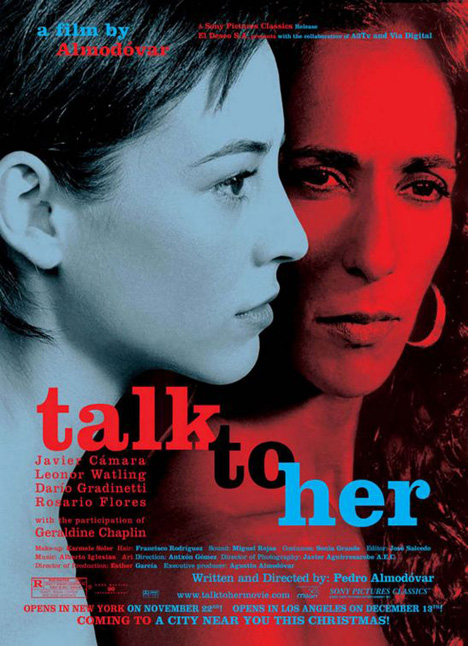 Tabloid journalist Marco (Grandinetti) falls for feisty bullfighter Lydia (Flores), the subject of a celebrity gossip piece he's working on, but she gets gored in the ring and sent to the hospital in a coma. In an adjoining room, private nurse Benigno (Camara) devotes himself to caring for Alicia (Watling), a beautiful young dancer who for years has lain comatose after a car accident. Meeting by chance at a theater, the two men find they have much in common and strike up a friendship.

A slyly subversive ode to love in all its myriad forms, "Talk to Her" is an intimate, involving tale that examines the dark and even perverse nature of masculinity with great compassion. As always, Almodóvar, who won an Oscar for his screenplay and was also nominated for his direction, coaxes exemplary performances from his players, especially Grandinetti — whose teary Marco is movingly guilt-ridden about Lydia's injuries — and Camara, playing a naive man whose obsessive attachment to Alicia takes a black-comic turn. With its striking visual flair and even a mini silent-film fantasy evoking Buster Keaton, "Talk to Her" is an audacious love fable with an enormous heart.