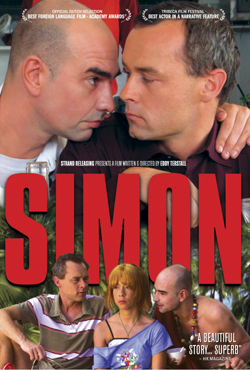 A traffic accident brings Camiel (Hensema), a shy, gay dentist, into the orbit of Simon (Geel), a straight, affably crude cafe owner and womanizer. The two become fast friends, but split over an indiscretion involving Simon's girlfriend, Sharon (Lodeizen). More than a decade later, the estranged pals bump into each other, and Simon, ill with a brain tumor and bringing up two adopted Thai children, eventually finds comfort from Camiel and his old circle of friends.

Written and directed by Eddy Terstall, this low-key, affectionately told Dutch dramedy follows the vicissitudes of a friendship over 14 years. The film’s two stars, Geel and Hensema, imbue the darker edges of the screenplay — which deals frankly with parenthood, sexuality, and the looming terror of death — with warmth and the spirit of camaraderie. Terstall has just the right touch, handling a potentially burdensome gay marriage scene with complete naturalness. “Simon” says: watch!

Simon of the Desert