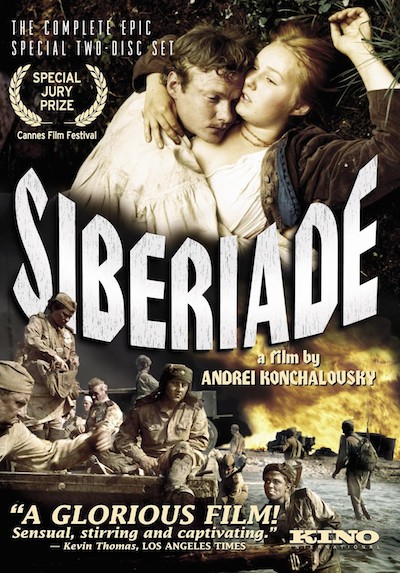 In the early 1900s Kolya is a young boy living in Yelan, a remote Siberian village, where the wealthy Solomin family looks down on his family. After time away, he returns to the village in 1932, a devoted party figure with his own young son, Alexei. Years later, Alexei (Mikhalkov) joins the army and leaves home. In the war, he saves the life of an officer, Filip Solomin (Okhlupin), whom he does not recognize. In 1964, Alexei returns to Yelan, determined to find oil in Siberia’s vast expanses. He reignites a relationship with Taya (Gurchenko), as Moscow officials (including Filip) debate flooding the valley with a new hydroelectric dam.  The fate of both families now hangs in the balance as Alexei perseveres with his drilling crew.

This epic tale spanning over 60 years is divided into four parts, with vintage newsreel footage marking the leaps of time between historical events such as the Revolution, WWII etc.  This rich melodrama of feuding families, set against the backdrop of vast social and political change, swirls around the central character of Alexei, played with charismatic energy by the director’s own brother. In one highlight, Konchalovsky shoots a horrific battle scene in a sepia toned hue that intensifies the desperation of Alexei. Likewise, scenes in a swamp ablaze with escaping natural gas have an eerie, supernatural atmosphere. With a 70s synth-pop score by Eduard Artemyev, this Cannes prize-winner is an immersive, multi-layered trip into the Siberian heartland, as well as the heart and history of the Soviet Union.