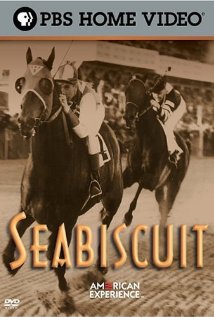 This documentary tells the remarkable story of hard-bitten jockey John "Red" Pollard and Seabiscuit, the underdog racehorse that became a world-renowned champion, despite a less-than-auspicious career start. Through interviews and old footage, Ives draws a portrait of their unique relationship, as well as the indelible figure's mulish trainer Tom Smith, auto magnate George Howard, and famed rider George Woolf, who helped transform these likely losers into beloved Depression-era heroes.

Seabiscuit was memorialized in a glossy Hollywood film a few years back, but this hour long PBS "American Experience" doc really explores the historical context and myriad personalities who popped up only briefly in the star-studded yet overblown narrative feature. Pollard's story, of an ex-prizefighter on the skids with an unflagging perseverance, is particularly intriguing, and the filmmakers make it clear why Seabiscuit's unlikely victory against triple-crown winner War Admiral resonated so deeply with our troubled nation.

Seance on a Wet Afternoon