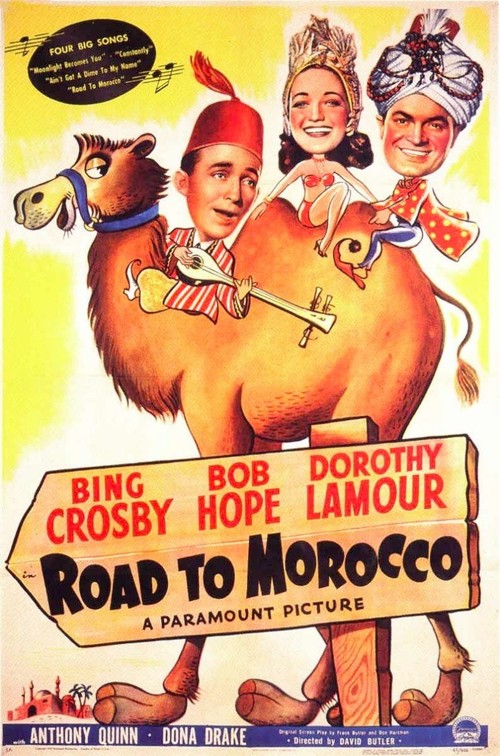 After an accident at sea, castaways Jeff (Crosby) and Orville (Hope) reach land on the North African coast. They travel across the desert by camel to a city right out of "Arabian Nights," where Jeff sells Orville into slavery. But he is bought by local beauty Princess Shalmar (Lamour) who, for mysterious reasons, wants him for her husband. When Jeff finds out that Orville is living the life of Riley in the royal palace, he tries to hone in on the girl himself. But Shalmar is also desired by the fearsome chieftain Kassim (Quinn), who will stop at nothing to win her back.

The third (and best) of the seven Hope/Crosby Road films, "Morocco" reunites the leads for a slaphappy adventure romance that provided wartime audiences with much needed comic escape. Hope and Crosby always had an easy, relaxed chemistry, and the zingers flow in an almost constant stream. Lamour was never lovelier than here, and the trio's rendition of "Moonlight Becomes You," with their voices mixed up, is a comic highlight. Other funny scenes include a camel spitting at Hope (an ad-libbed moment on behalf of the camel) and a hilarious fly on the nose sequence. Shot mostly on studio sets, the comedy ambles rather than zips — but it's great fun and a fantastic introduction to these two iconic performers.