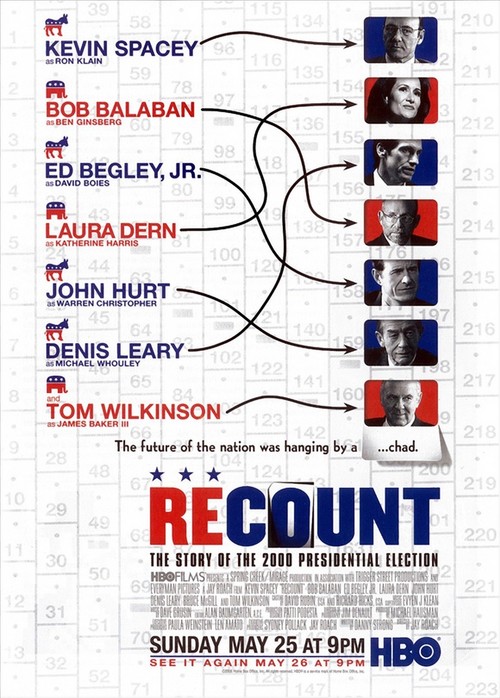 This enthralling docudrama follows the political strategists on both sides of the hotly contested 2000 U.S. Presidential election. Democratic campaign advisor Ron Klain (Spacey) refuses to concede the election after learning about voter confusion in Palm Beach County, Florida. The process is further complicated by the hanging/dimpled chad imbroglio. GOP party elder James Baker III (Wilkinson) and Democrat Warren Christopher (Hurt) are brought in to lead the legal battle on both sides, as Klain and his colleague Michael Whouley (Leary) demand a hand recount of the ballots. Florida Secretary of State Katherine Harris (Dern) imposes a deadline to resolve the issue, but the ultimate decision will rest with the Supreme Court.

Everyone knows how this ends, but that doesn't lessen the enjoyment of watching this tight political thriller unfold. Spacey carries off the central role with gusto, bringing first-time scripter Danny Strong's clever screenplay to vibrant life. Other performances are likewise solid, with particular praise going to Dern, who won a Golden Globe for her eerily spot-on turn as Harris. Director Roach intercuts the drama with actual news footage, underlining the authenticity of what's being portrayed, then ratchets up the tension as each side finds a new loophole to exploit. "Recount" may make you doubt our country's electoral process, but it will reinforce your faith in good filmmaking.