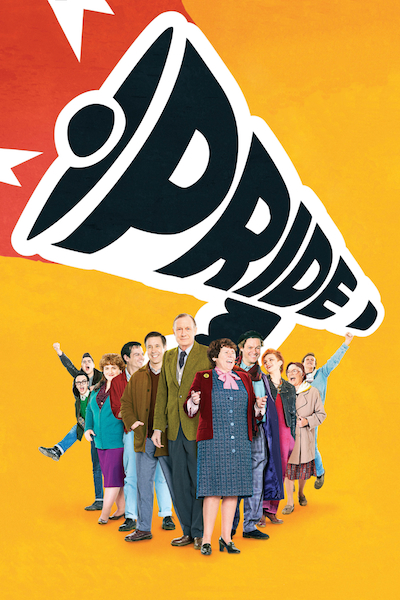 During the British miners’ strike of 1984, a group of gay rights activists in London forms Lesbians and Gays Support the Miners (LGSM) in solidarity against the intractable Margaret Thatcher. Led by the young, charismatic Mark (Schnetzer), the group travels to a small Welsh community to deliver food and money. Joining Mark is the barely out of the closet Joe (MacKay) and the flamboyant Jonathan (West). Initially given a cool if not downright hostile reception by the macho miners, LGSM perseveres, and ends up forming an unlikely alliance with the striking workers, their families, and friends.

Based (believe it or not) on true events, Warchus’s rousing tale of solidarity is political cinema by way of feel-good drama. Stephen Beresford’s even-handed script finds humor in the odd couple pairing of city and country, and poignancy in the gradual rapprochement between strangers who, under normal circumstances, would be unlikely to meet, much less mix. West’s dance moves to “Shame, Shame, Shame” help break the ice, and Nighy’s touching performance as a senior villager with a secret adds poignancy. Winner of a BAFTA for Outstanding Debut, this uplifting movie is in the spirit of other great British outings like “The Full Monty” and “Billy Elliot.”