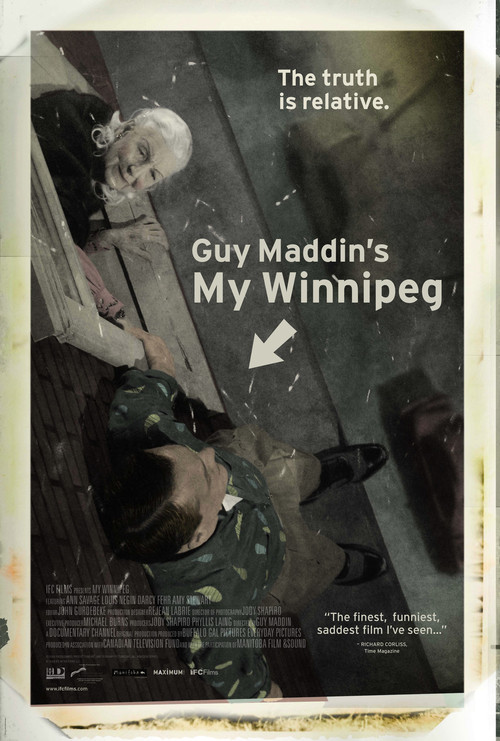 Director Maddin reminisces about his childhood town of Winnipeg, Manitoba as he takes a night train out of the city that has held him spellbound for years. Dreams, memories, and reality intermingle as Maddin's poetic voiceover recounts historical events from Winnipeg's past, as well as his own life story. Recreating snippets from his childhood, he has B movie star Ann Savage (1945's "Detour") portray his mother, while Darcy Fehr stands in for himself as a boy. He recalls his aunt's beauty salon and hockey games at the old arena (since destroyed), blending in rarely seen archival footage for historical flavor. What a trip this turns out to be.

To watch a Maddin film is to enter a strange netherworld where film's usual narrative conventions do not apply. He evokes silent films with his black and white, jerky images, photomontages and inter-titles, but at the same time, his filmmaking functions as a sort of modern day psycho-meditation. Dramatizations become hypnotic ruminations on memory, with Maddin's impulsive poetry forming the soundtrack. You hear about Winnipeg's history, a workers' strike in 1919, a racetrack tragedy... and you wonder how much of it is true. Does it really matter? This fascinating, totally original Freudian travelogue should captivate more adventurous viewers, but we hasten to add it's not for all tastes.