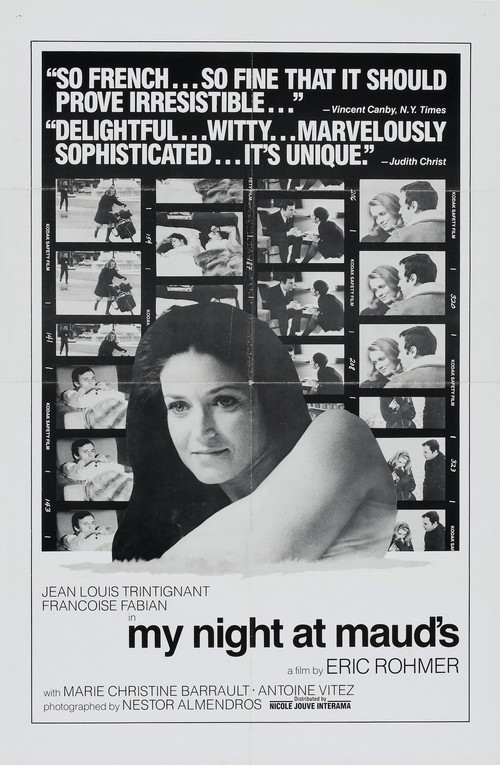 My Night at Maud's

While attending Mass, devout Catholic engineer Jean-Louis (Trintignant) falls in love with Francoise (Barrault), whom he takes for his soulmate though they've never met. Later that day, he runs into old friend Vidal (Vitez), a Marxist professor who invites him to dine with his freethinking lover, Maud (Fabian). In the lively philosophical discussion that ensues, Jean-Louis finds his core beliefs under challenge.

Nominated for the Best Foreign Language Film Oscar in 1970, Rohmer's "Night" remains one of the New Wave auteur's most cherished and well-known films. Shot in rich black-and-white by Nestor Almendros, this is a movie fueled by conversation and heady discussion of freedom of choice, the evidence for God's existence, and, of course, the question of virtue. Jean-Louis is a man not only beset by doubts, but tempted by the intellectual and sexual allure of Fabian's Maud. Rohmer's intelligent handling of this basic scenario and the fine work of his ensemble cast make this a "Night" to remember.

My Own Private Idaho