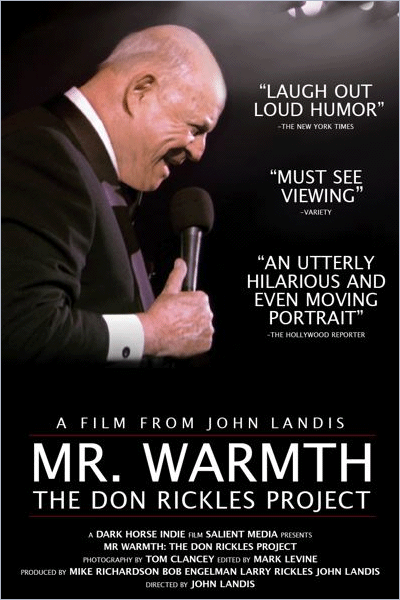 A master of pointed, politically incorrect insult comedy, Don Rickles has enjoyed a 50-year career in show biz. In this hilarious doc, John Landis tries to get at the heart of what makes the beloved funnyman so uproarious, tracing his career from the mob-run casinos of Vegas in the 1950s, to his infamous unscripted appearances on Johnny Carson, to the present day, where the 81-year-old performer (at the time) brings down the house at the Golden Nugget Hotel.

Landis's fascinating and outrageously funny "Mr. Warmth" pays tribute to a comedian who's made a career out of offending people. What comes across the most, though, is just how well respected Rickles is by his peers. Weaving in interviews with Chris Rock, Robin Williams, and Clint Eastwood with club appearances, fond remembrances of bosom buddy Bob Newhart, and loads of film and TV clips from "Kelly's Heroes" and "The Tonight Show, the king of the putdown emerges as a much more gentle, kindhearted person than his often noxious stage persona would ever convey. Roll out the red carpet for Mr. Warmth — he'll have you in stitches!