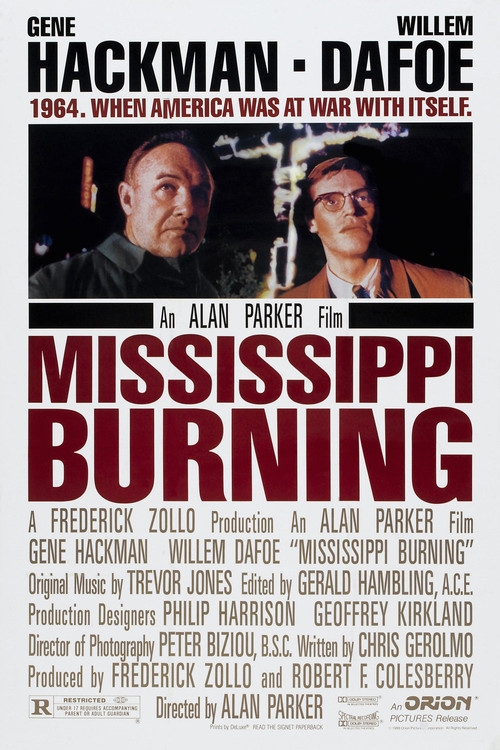 Alan Parker's blistering film recreates the true story of three civil rights workers who were murdered in Mississippi in 1964, and takes some dramatic license in doing so. Agents Rupert Anderson (Hackman) and Alan Ward (Dafoe) arrive down South to investigate the disappearance of the three men (two white, one black), and their warm welcome comes in the form of a burning KKK cross. (Dourif, Ermey, Sartain and Rooker make up this unsavory welcome party, and McDormand is also on hand as Dourif's abused wife.) The FBI team must then break through this small town's wall of silence to solve the mystery, while trying to control violent retribution against the local black population.

Though detractors claim the movie inaccurately depicts a white FBI coming in to rescue helpless blacks, in fact the film features some extremely courageous black characters, and at the outset, the FBI seems more muddled than heroic. Regardless of debates on historical accuracy, the movie remains a skillfully paced nail-biter — and it's extremely well-played. Though McDormand was Oscar-nominated for the small but pivotal role of Mrs. Pell, the movie is Hackman's, as he turns in his most explosive performance since "The French Connection" (he also got a richly deserved Oscar nod for this).