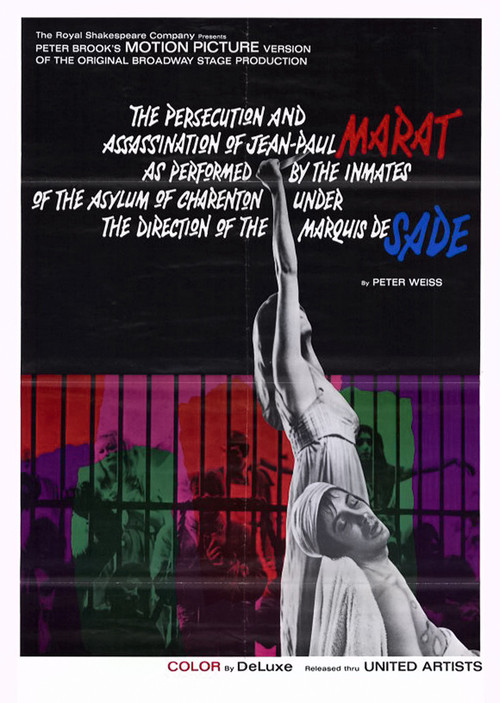 In 1809, at the Charenton asylum in France, notorious inmate and sexual libertine the Marquis De Sade (Magee) stages a play about the French revolutionary Jean-Paul Marat (Richardson) for a modest audience, including sanitarium director Coumier (Rose). Before long, the chaos dramatized by Sade's play triggers heated squabbles between the unhinged participants, unleashing a fervor that turns the madmen against their keepers.

Bringing Peter Weiss's shocking, critically acclaimed play to the big screen, Peter Brook enlists the formidable talents of the Royal Shakespeare Theatre Company, who collectively drive this masterwork of social critique and lurid lunacy to the edge. Ostensibly a chamber drama about a political assassination, the film reveals the relationship between tyranny and madness, while giving De Sade a platform for his Nietzschean philosophy of individual freedom. Among a stellar cast, Glenda Jackson is particularly riveting as Marat's murderer. You'd be nuts not to see "Marat/Sade " as an allegory about abuse of power with ringing resonance for today's world.