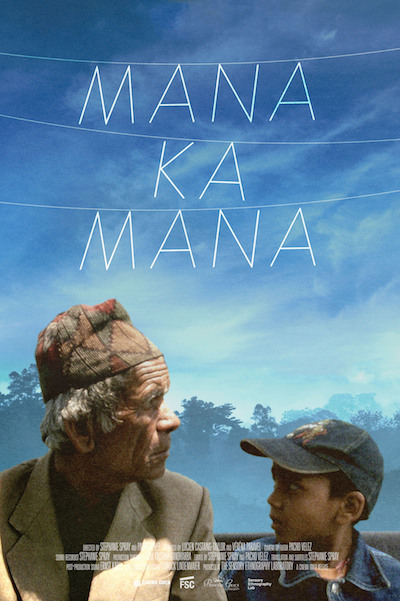 In the mountains of Nepal, a high-speed cable car brings locals and tourists up to the temple of Manakamana, a Hindu goddess.  Where once days of hiking were needed to reach the summit, now the journey lasts approximately 10 minutes. This contemplative film observes 11 sets of passengers (including goats!) as they ride up to worship or sightsee. The camera remains fixed inside the car as people come and go, acting as a constant witness to lives being lived in a still highly remote place.

This project originated at the Sensory Ethnographic Laboratory at Harvard University and continues to expand the definitions of “non-fiction cinema”.  Shooting on 16mm film, the directors resist the temptation to pan down to the corn fields and forests below, allowing a patient viewer to form his/her own mental image of the lush scenery. Some passengers sit in silence, others chat mundanely. Three elderly women giggle, three young men pose for their own cameras, and two women delight in their melting ice cream bars.  As the minutes tick by, a hypnotic spell is cast as this experimental film poetically captures tradition moving into the present. Not for all tastes, but patient, adventurous viewers should feel rewarded.

Manchester by the Sea