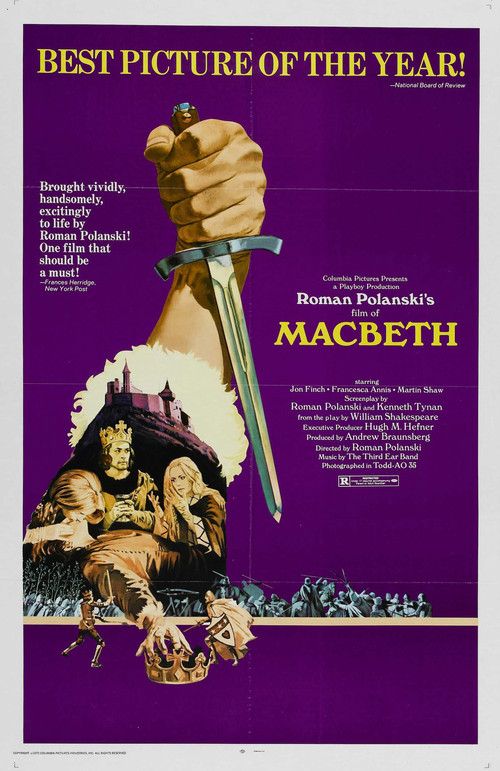 Having fought nobly on the battlefield and won the favor of the reigning monarch (Selby), Scottish nobleman Macbeth (Finch) and his friend Banquo (Shaw) come upon three witches who prophesy that Macbeth will become Thane (nobleman) of Cawdor and King thereafter. When the former prediction comes true, Macbeth’s ambition takes wing. With his scheming wife Lady Macbeth (Annis) goading him on, he murders King Duncan and assumes the crown. Increasingly paranoid and guilt-ridden, the new King and Queen then embark on a killing spree in a wildly misguided effort to consolidate their power.

Polanski’s version of “Macbeth”was released just two years after the murder of his wife Sharon Tate, and the film’s bloody, nihilistic quality may well reflect the impact of that real-life tragedy. Shot on location in stunning, desolate Wales, the director’s perfectionism took the film well over-budget. Though initially it performed badly at the box office, this highly accessible rendering of the Bard’s darkest work has since earned classic status due to its expert pacing, striking cinematography, and superb acting (with Finch a stand-out in the title role). Time to brush up on your Shakespeare? Here’s your movie.