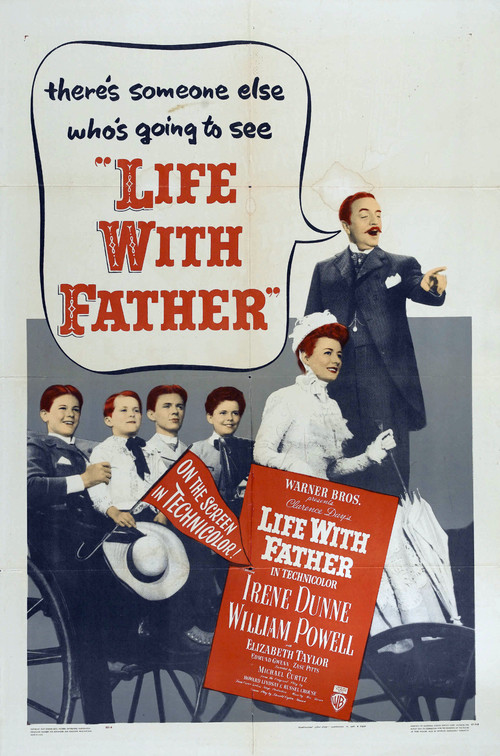 Wealthy financier Clarence Day (Powell) lives with his wife Vinnie (Dunne) and four children in a Madison Avenue townhouse in 1880s New York. His attempts to run a disciplined, well-ordered household are thwarted at every turn by Vinnie's scatter-brained schemes and dizzying logic. Much to her husband's chagrin, Vinnie’s cousin Cora (Pitts) and family friend Mary (Taylor) come to visit, the latter attracting the attention of eldest son (Lydon). Then, the devout Vinnie discovers to her horror that Clarence has never been baptized, and she determines to rectify the situation, come what may.

This fizzy period comedy was adapted from the hugely popular play of the same name which ran for years on Broadway, and which originally sprang from Clarence Day, Jr.'s own memoir. Director Curtiz ("Casablanca," "Captain Blood") directs with expert comic timing and pacing, proving there was no genre he couldn't tackle. Both the Oscar-nominated Powell and Dunne are fabulous as the bickering but loving couple; their exchanges are filled with clever repartee. Just watch as they debate the need for a ceramic pug dog, or the placement of a rubber houseplant. Egad! Also, check out a gorgeous young Elizabeth Taylor, who was just fifteen when this was made. (Note: Beware the poor quality public domain versions.)

Life and Nothing But