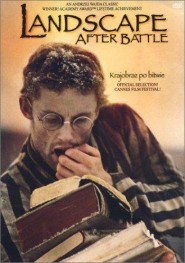 When a group of Polish POWs are freed by the Americans in the closing days of World War II, they're euphoric. But the happy days don't last for long: they're soon moved to another camp, and subjected to another form of imprisonment. Sensitive poet Tadeusz (Olbrychski) chafes under this new incarceration until the arrival of Nina (Celinska), a young Jewish girl who also survived the war. The two strike up a tentative romance, and make plans for a return to life in Poland. But will those plans come to fruition?

"Landscape" is one of master Polish director Wajda's ("Man of Iron," "Danton") lesser-known films, but it deserves to stand amongst his recognized classics. From the Vivaldi-scored, wordless opening in which hundreds of prisoners enjoy new-found freedom, to Tadeusz and Nina's extended romp in the forests outside the camp, we experience a cinematic work of art chock-full of indelible images and daring directorial choices. Though it may seem thin on formal plotting, stick with its young lovers — you'll find a remarkable, unconventional romance set within a remarkable, unconventional film.

Landscape in the Mist