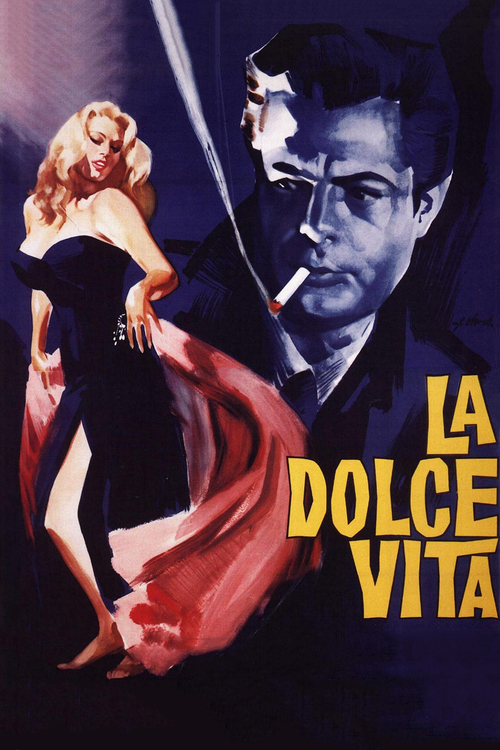 Gossip columnist Marcello Rubini (Mastroianni) aspires to be a serious writer, but his work for the tabloids is far too lucrative to forfeit. One night, he picks up a lonely heiress, Maddalena (Aimée), afflicted with a chronic case of ennui, and embarks on a hedonistic romp through Rome. Once he sheds Maddelena, he encounters a prostitute, then meets up with buxom Hollywood starlet Sylvia (Ekberg) at a press conference. Eventually, Rubini's lusty but hollow adventures with sex, booze, and lavish, all-night parties bring him to a point of crisis.

Daring for its time, Fellini's Oscar-nominated "Vita" is remembered best for the zaftig Anita Ekberg's swim in the Trevi Fountain, and for the very first shot in the film, of a statue of Jesus being lifted over the city of Rome by helicopter. Yet its almost three hours' running time includes a procession of unforgettable images and scenes, as Mastroianni — in an indelible, star-making performance — marches numbly into the vacuous, hedonistic life of modern-day celebrity in Rome, finally succumbing to the forced frivolity surrounding him. "Vita" remains a sharply observed, absorbing study of dizzying decadence.