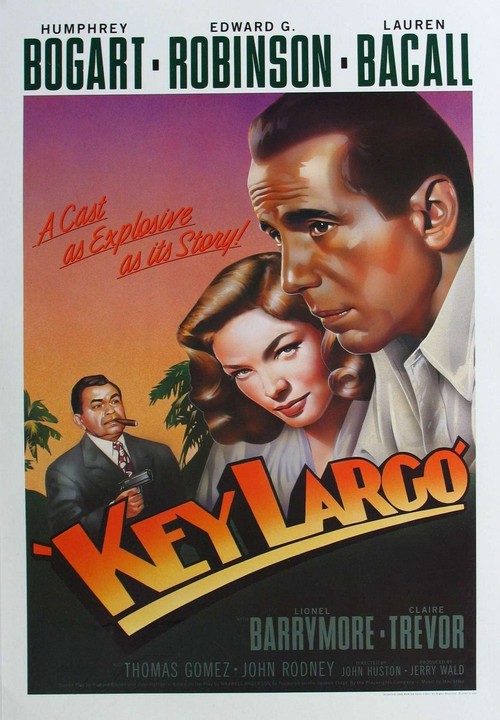 One of the brink of a huge storm, WWII vet Frank McCloud (Bogart) visits a disheveled hotel in the titular island town to pay his respects to Nora (Bacall), the widow of a deceased war buddy. Run by Nora's father James (Barrymore), the hotel plays host to some pretty seedy urban types, and Frank soon discovers why: infamous mobster Johnny Rocco (Robinson) and his men have slinked back into the country and temporarily seized control of the establishment.

Based on Maxwell Anderson's play, Huston's "Key Largo" is a classic 1940s noir featuring taut direction and indelible performances. In a cast that boasts Bogart, Bacall, Oscar-winner Claire Trevor as Rocco's drunken mistress, and Lionel Barrymore as the cantankerous hotelier, it's Robinson's portrayal as Rocco — filled with sadistic, savage power — that occupies center stage. Bogie is comfortable in star mode as the taciturn good guy who comes through in the clinch. Don't miss that ending on board a boat called the "Santana" (the name of Bogart's own yacht and production company).