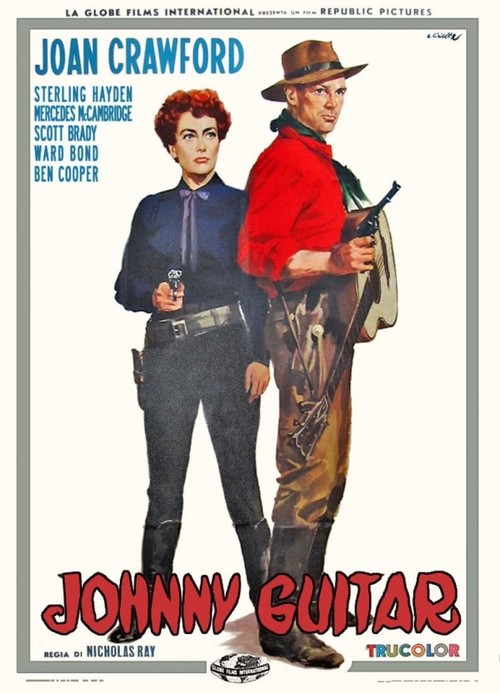 Former good time girl Vienna (Crawford) owns a saloon outside a one-horse town. Business is slow but she predicts things will pick up when the new railroad comes through. Her questionable background has raised the ire of Emma (McCambridge), a local cattle baron who will use any excuse to drive her out of town. Emma is also in love with the Dancin' Kid (Brady), who only has eyes for Vienna. When a local bank is robbed, Emma and a blood-hungry posse, led by businessman McIvers (Bond), blame Vienna and the Kid's outlaw pals. Luckily, Vienna has just hired ex-flame Johnny Guitar (Hayden) to work in her saloon, and he knows his way around a six-shooter... as well as a woman's heart.

This delightfully bizarre cult Western earned the admiration of directors like Scorsese and Truffaut, and it's not difficult to see why. Director Nicholas Ray turns the rules of conventional Westerns on their head by making this a struggle to the death between two women. The butch Emma's passionate, irrational hatred towards Vienna projects a barely repressed sexual frustration that was daring for its time. Hayden is fine in the title role, but this is strictly a Joan and Mercedes affair. Pluck this "Guitar."

Johnny Mercer: The Dream's on Me