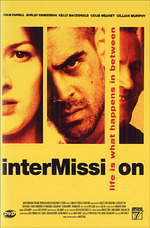 In this gritty portrait of Dublin, several colorful characters and subplots eventually intersect: among them, small-time criminal Lehiff (Farrell) wants to shake gruff, self-aggrandizing police detective Jerry (Meaney), who's tailing him after a petty theft. Lehiff's buddy John (Murphy) has recently broken up with girlfriend Deirdre (MacDonald) — an "intermission," he calls it — and devises a scheme to set up her new man, bank manager Sam (McElhatton). Then there's Sally (Henderson), who won't accept that her love life could vastly improve if she just got rid of that hair on her upper lip.

First time director Crowley's infectiously profane tribute to Dublin is populated by parted lovers, petty thieves, and macho policemen. Fortunately, he overlays all the silly, sordid goings-on with a palpable affection for these characters, which makes this pitch black comedy go down much easier. Meaney stands out in a hilarious turn as an egotistical, street-hardened cop who wants his own reality show. Smart, fast and fun, you'll actually enjoy sitting through this "Intermission."