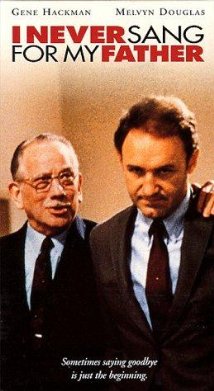 I Never Sang For My Father

Forty-year-old widower and college professor Gene Garrison (Hackman) is a devoted son to his loving mother (Stickney) and imperious father (Douglas), visiting them regularly in suburban New York. With his mother's blessing, he hopes to move to California to remarry. But when his mother dies unexpectedly, he must rethink his plans and deal with his grieving father, who has started to become forgetful and belligerent. His sister (Parsons) comes home for the funeral and encourages Gene to get on with his own life. Gene is torn between desire and obligation.

Adapted by Robert Anderson from his own stage play, this poignant study of a father and son and the void between them is heartbreaking in its power and truth. Douglas and Hackman were both nominated for Academy Awards; their symbiotic performance a master-class in naturalistic acting and reacting. Just watch the hurt in Hackman's eyes as he strives for the love of a self-consumed father who is unable to show emotion. Scenes of Hackman touring hospitals full of abandoned elderly people are stark and horrifying. Cates directs simply without the need for cinematic flourishes, allowing the dialogue and acting to come to the fore. This is a marvelous drama that speaks eloquently to what is not said between parents and their children.

I Only Want You To Love Me