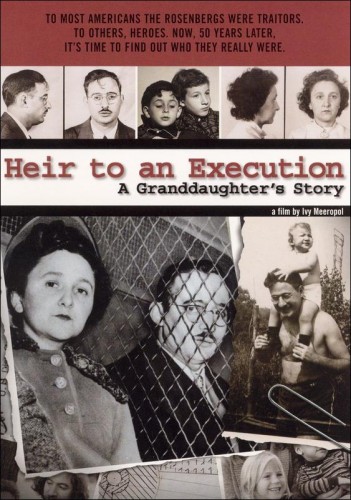 Heir To An Execution: A Grandaughter's Story

Ivy Meeropol directs this searching, painfully intimate exploration of the infamous Rosenberg spy case from the early fifties, when her grandparents, Julius and Ethel Rosenberg, were convicted of passing atomic secrets to the Soviets, and executed soon after. The film does not attempt to resolve their guilt or innocence, which is actually to its credit. Instead, it examines the human toll resulting from this ugly chapter in our country's history.

This touching, powerful documentary re-opens old wounds that have yet to heal, a fifty year old espionage case that still defies reason. An innocent grandchild wants to understand what really happened, and though she (and we) get somewhat closer to the truth, we discover there is much that may never be explained. Key facts and motivations have been obscured by strong emotions, deep-seated allegiances, and most critically, the inevitable passage of time. What is certain and painfully real is the legacy of shame and uncertainty the Rosenberg descendants must bear. Don't miss this engrossing, important work.

Hell and Back Again