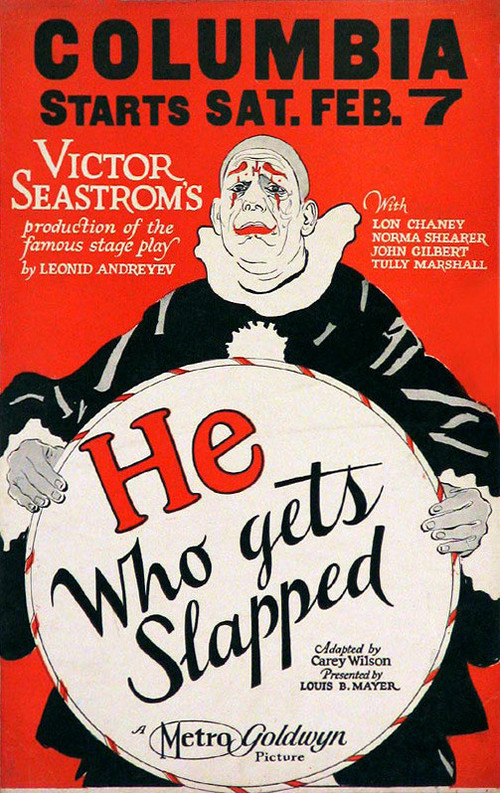 He Who Gets Slapped

Paul Beaumont (Chaney) is a brilliant but impoverished scientist whose benefactor, Baron de Regnard (McDermott), presents Paul's groundbreaking work to the Academy of Sciences as his own. When Paul challenges him openly, the Baron slaps him and the hall explodes with laughter. The betrayal is then compounded, as Paul's wife (King) also slaps him — before running off with the Baron! Years later, Beaumont has turned ignominy into fortune performing as HE, a circus clown who is slapped for laughs. He falls in love with lovely circus ingénue Consuelo (Shearer), but she loves the dashing acrobat Bezano (Gilbert). Meanwhile, Consuelo's father (Marshall) wants to marry her off to an older rich suitor — the evil Baron himself.

This poignant love story was the first film to be produced under the newly formed MGM banner and the first one to feature Leo the lion in the opening logo. Chaney is heartbreaking as the sad clown, affecting a naturalistic performance style that ran counter to the prevailing melodramas of the time. Just watch his heartsick expression as he gazes longingly at Consuelo patching up his ripped costume. "Slapped" also functions as an exciting tale of revenge, as HE eventually puts a hungry lion to good service. Young players Gilbert and Shearer complement Chaney perfectly, projecting the beauty and charisma that would soon make them both top stars. Don't miss this sadly neglected silent classic — its re-discovery is long overdue.