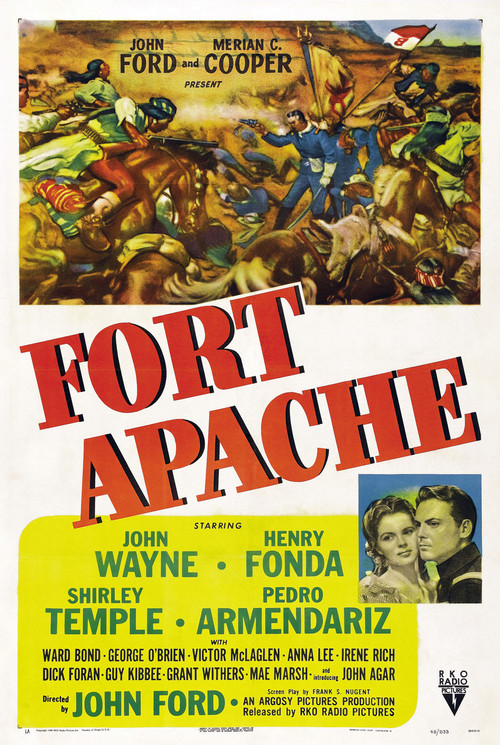 Resentful of his new duties at remote Fort Apache, glory-seeking Civil War veteran Lt. Col. Owen Thursday (Fonda) insists on imposing martial discipline on the rough-edged outpost, ignoring the sound advice of Captain Kirby York (Wayne) — especially when it comes to handling Indians. Blind to the fact that white rabble rousers are to blame for the fort's woes, Thursday launches an ill-advised campaign against the Apaches with devastating results.

The first installment in Ford's illustrious Cavalry Trilogy, "Apache" soars thanks to Fonda's highly effective, unsympathetic turn as an arrogant, rigid officer, and the brawny Wayne, superb as a savvy frontiersman who knows it's foolish to go up against Apache leader Cochise. Apart from critiquing sensationalized military heroics and the myth of the "savage," Ford works in sequences of everyday frontier rituals, like chores, dances, and even a tentative romance involving Thursday's daughter, played by an all-grown-up Temple. With its exquisite black-and-white shots of Monument Valley, assured acting, and gripping storyline, "Apache" is an enduring Western winner.

Four Adventures of Reinette and Mirabelle