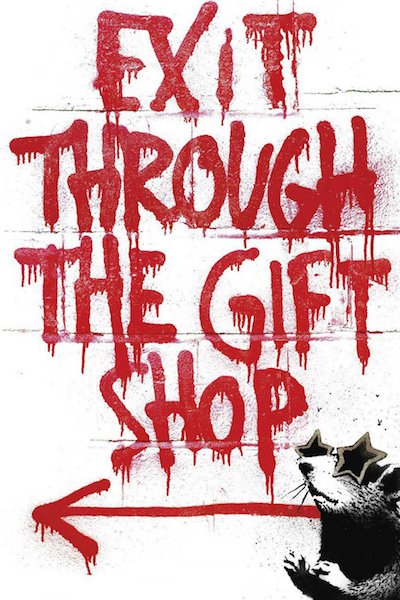 Exit Through the Gift Shop

Thierry Guetta is a nervy, eccentric Frenchman, living in Los Angeles, who is never without his video camera.  He gets turned on to the undercover activities of graffiti artists, and becomes the primary documentarian of this happening scene. Incredibly, he ends up locating-and getting permission to record- the highly elusive British provocateur, Banksy. Ultimately failing to edit his footage into a coherent film about street art, he turns his attention to becoming an artist himself, putting everything on the line to mount his first show.

What begins as a fairly straightforward portrait of the underground graffiti movement turns into a bizarre, often cutting treatise on the value and commercialization of art. Almost imperceptibly, the movie changes tacks, becoming less about the enigmatic Banksy (shrouded in hoodies and digitally altered) and all about Guetta, whose behavior only gets odder as the picture progresses. Is this Frenchman a simply a fearless conman or a true burgeoning talent?  Culling down over 10,000 hours of home video footage, Banksy fashions a one-of-a-kind, Oscar nominated cinematic installation that’s destined for cult classic status.