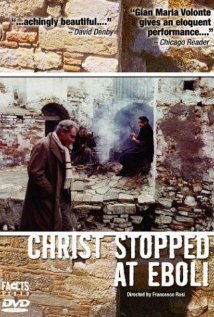 Exiled by Mussolini to a remote, isolated village in Southern Italy for his anti-fascist political views, artist-intellectual Carlo Levi (Volonte) finds himself confined to a quiet, uneventful existence among the stand-offish provincials. But in time, as word of his medical “expertise” spreads among the impoverished villagers, Levi finds new purpose in his role as conscientious physician, setting up an infirmary with the help of housekeeper Giulia (Papas).

Based on the real-life Levi’s autobiographical novel, Rosi’s film is a quietly affecting film about poverty, politics, and human resilience in 1930s Lucania, a place forgotten by time and the forces of history, while Mussolini waged a land-grabbing imperial war in Africa. As Rosi’s moral observer, Volonte anchors the film with a fine, understated performance that’s no less watchable for being so. What comes through in Rosi’s humble vision is a melancholy sense of place and deep sympathy for the peasants of his native country.

Chronicle of a Summer