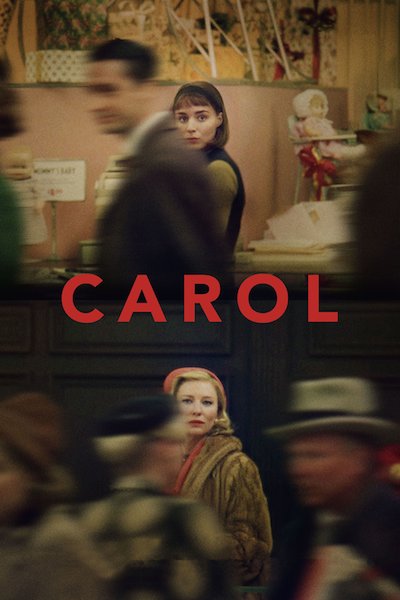 In 1950s New York City, department store clerk Therese (Mara) lays eyes on elegant socialite Carol Aird (Blanchett) across a crowded room, and is instantly drawn to her. Despite the difference in their ages and social standing, they start a relationship that gradually evolves into a love affair. Carol’s husband Harge (Chandler) suspects the true nature of the friendship (it seems she’s been down this forbidden path before), and threatens to expose Carol’s sexuality if she doesn’t cede custody of their daughter.

Adapted by Phyllis Nagy from Patricia Highsmith’s 1952 novel “The Price of Salt”, this mood-drenched romance from Todd Haynes once again pays tribute to the ripe technicolor melodramas directed by Douglas Sirk in the fifties. (Of course, Sirk could not have gotten away with this material.) Working on Super 16mm film, cinematographer Edward Lachman makes us feel we’ve time-traveled back to the Eisenhower era, reinforced by Phylis Nagy’s knowing, Oscar-nominated screenplay and terrific acting by a first-rate cast (Mara won best actress at Cannes, and Blanchett received an Oscar nod as well). Director Haines handles the proceedings with considerable taste, subtlety, and style. Here’s to “Carol”!