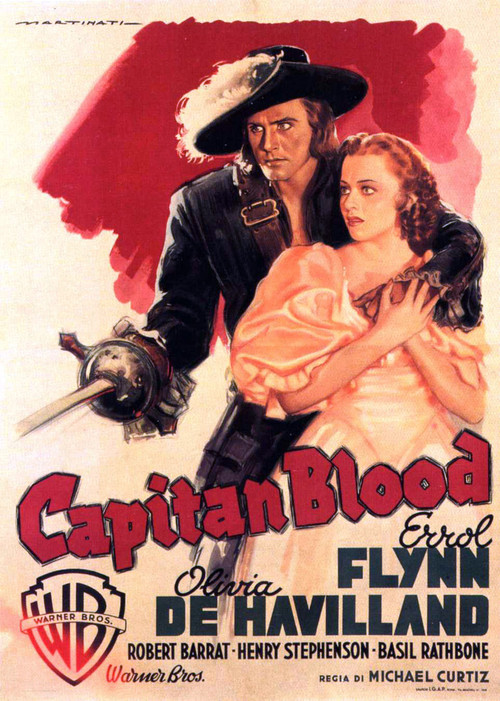 In this lusty recounting of the Rafael Sabatini tale, Flynn is Peter Blood, a doctor unjustly sentenced to servitude by the British Crown. Chafing against captivity, Blood escapes and becomes a pirate on the high seas. He makes as good a pirate as doctor, wielding a sword in a way they don't teach you in medical school. Beyond zesty sword fights, there are grand sea battles, and of course, romance, as Blood falls for Arabella Bishop (de Havilland), daughter of Colonel Bishop (Atwill), cruel master of the penal colony where Blood is initially sent.

"Blood" made an overnight star of the Tasmanian Flynn, and no wonder. His combination of good looks, athleticism, and sheer personality brought back the swashbuckler in – forgive the pun – one fell swoop. Curtiz's direction is predictably assured, and both Atwill and pirate nemesis Rathbone make truly despicable villains. Finally, young de Havilland is the perfect match for Flynn; it's easy to see why they'd be paired in seven more Warner pictures.