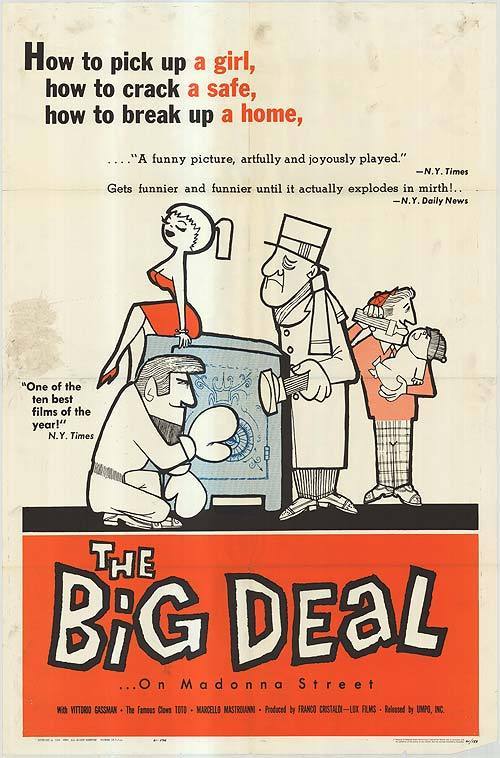 After fooling a rival thief into telling them the whereabouts of an easy-to-crack safe, amateur crooks Peppe (Gassman) and Tiberio (Mastroianni) lead a group of bumbling fools in an attempt to dig an underground tunnel into the pawn shop where it's housed. Aside from a plague of personal problems overshadowing their scheme, everything that could go wrong with their elaborate plan does, landing them all in even more humiliating predicaments.

A brilliant spoof of caper films, Monicelli's "Deal" is a manic, crowd-pleasing romp, thanks to an inspired script and hilarious performances. Monicelli focuses as much on his sad-sack characters as he does the details of the heist, and it's impossible not to find these inept robbers — who drill a hole through the wrong wall — completely endearing. Mastroianni, as buffoonish photographer turned car thief Tiberio, is a gas, even up against fabled funnyman Toto (as a scene-stealing, semi-retired burglar). Watch, too, for a young Claudia Cardinale. Filmed on location in Italy, "Madonna" was remade as "Crackers" in 1984, minus the uproarious laughs.