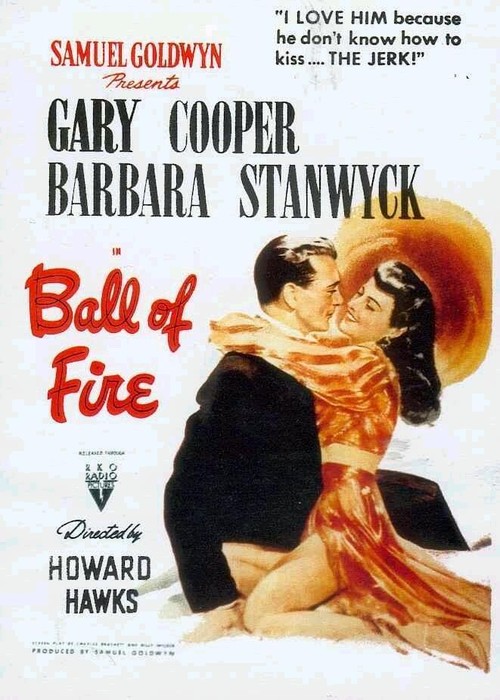 Researching modern slang for an encyclopedia he's editing with seven elderly eggheads, professor of English Bertram Potts (Cooper) drops into a nightclub where show-stopping conga dancer Sugarpuss O'Shea (Stanwyck) is performing and tries to recruit her for his work. She declines, but reconsiders when her boyfriend, mobster Joe Lilac (Andrews), asks her to hide out from the D.A., who wants her on his witness stand.

A farcical twist on "Snow White and the Seven Dwarfs," "Ball of Fire" is in a witty, delightful class all its own. And what a lineup: Cooper, Stanwyck, Dana "the Mask" Andrews, Dan Duryea, and assorted others, directed by Hawks, working from a snappy script penned by Billy Wilder and Charles Brackett! The premise — a moll hides out in a scholarly institute, wreaking havoc with the libidos of seven gentlemen twice her age — is brilliant enough, but Hawks brings a romantic poignancy to this picture, too, which earned three Oscar nominations. Cooper is fun to watch as the handsome but repressed grammarian, while Stanwyck chews up the scenery as the vixenish, vivacious gal pretending — or is she? — to love him. And check out Gene Krupa on matchsticks!

Ballad of a Soldier