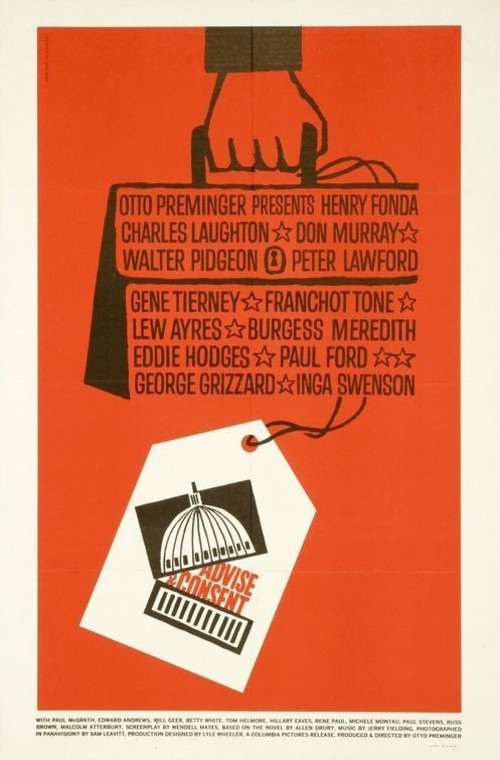 After Robert Leffingwell (Fonda) is hand-picked by the President to be the next Secretary of State, a group of senators led by Bob Munson (Walter Pidgeon) try to push the appointment through against the wishes of conniving Dixiecrat Seabright Cooley (Laughton). Meanwhile, Brigham Anderson (Don Murray), another Congressman whose vote is crucial to confirming the controversial candidate, attracts negative attention when he decides to investigate Leffingwell, and himself becomes the victim of political blackmail.

An engrossing adaptation of Allen Drury's best-selling novel, and loosely based on real-life lawmakers, Preminger's incisive study of Congressional wheeling and dealing boasts a dazzling ensemble cast, including Pidgeon, Murray, Peter Lawford, Gene Tierney, Franchot Tone, and Burgess Meredith. In addition to a strong performance from Fonda, the film is especially memorable thanks to Laughton's grinning, snake-slick performance — sadly, his last. Smear campaigns, public-image management, and behind-the-scenes machinations are all part of the senatorial rat race in "Advise and Consent," an ultra-realistic drama that seems timelier than ever.