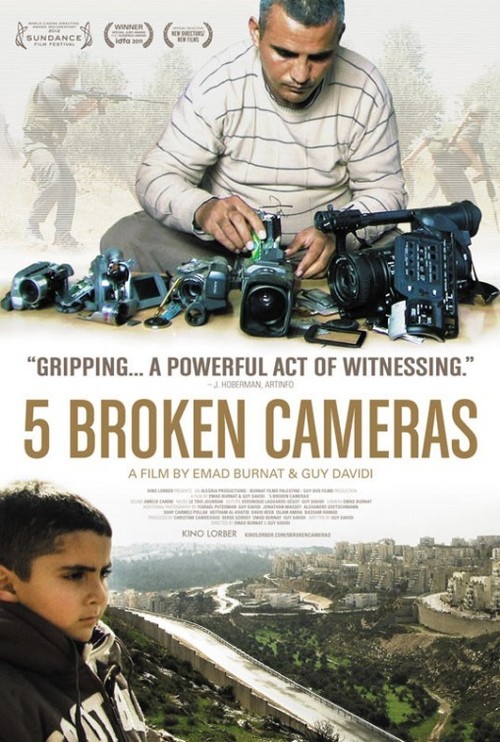 In 2005, Palestinian farmer Emad Burnat was given a video camera to record the birth of his fourth son Gibreel in his town of Bil’in on the West Bank. At the same time, he began filming the protests against the construction of a separation barrier that runs through the villagers’ land, signaling the further encroachment of sprawling Israeli settlements. As farmland is razed and precious olive trees burnt, the protesters are met with tear gas, arrests and even bullets from the Israeli army. As Gibreel celebrates his fifth birthday, Burnat has lost five cameras — and at least one good friend — to violence and gunfire.

Filmed with startling intimacy, Burnat’s Oscar-nominated film is essential viewing for anyone interested in the intractable Middle East crisis. In this searing, highly personal documentary, we note that little Gibreel’s first words are "wall" and "army," and that he grows up fully accustomed to a life characterized by ongoing antagonism and loss of life. Joining forces with Israeli director Davidi in 2009, the two men had the inspired idea of shaping the film around the timeline of the cameras, their destruction a symbol of the ongoing struggle. Unabashedly pro-Palestinian, yet apolitical in its direct reportage, this Sundance award winner delivers both as an affecting portrait of a Palestinian family, and a powerful record of peaceful resistance.