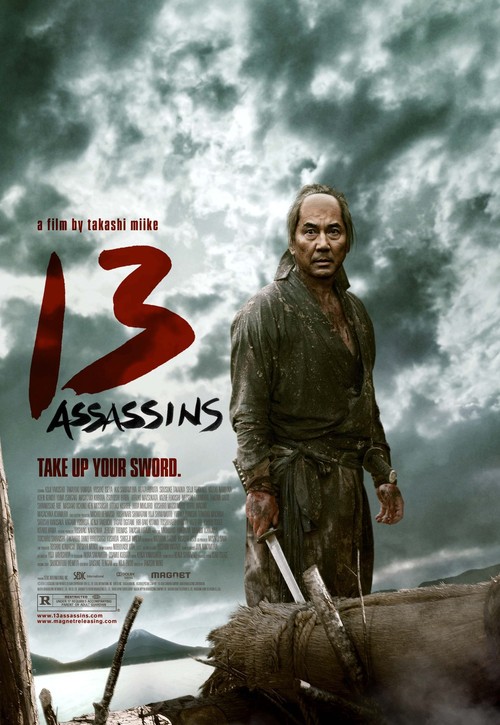 In nineteenth century feudal Japan, tyrannical Lord Naritsugu (Inagaki) rapes, tortures, and murders innocent people on whim. As younger brother of the shogun, Naritsugu is sheltered from justice, until a high-ranking government official, Sir Doi Mikijiro (Hira), secretly recruits renowned samurai Shinzaemon (Yakusho) to murder the sadistic lord. Shinzaemon gathers 11 other samurai, and they are joined by a 13th assassin, an eccentric hunter named Koyata (Iseya) who seems as much forest sprite as human. Though hopelessly outnumbered, this small band launches a daring campaign against Naritsugu and his army, led by veteran samurai Hanbei (Ichimura), risking everything to fulfill their righteous mission.

Featuring one of the longest, bloodiest, most beautifully choreographed martial arts battle scenes on film, this sweeping period drama offers electrifying thrills for action fans. A remake of a 1963 film with the same title, "Assassins" also examines the morality of obeying authority without question. Helmed by prolific cult director Miike, there's an abundance of intense swordplay and inventive combat maneuvers. The performances are uniformly strong, with Yakusho and Ichimura outstanding as opposing veteran warriors, and Iseya providing comic relief as the irreverent woodsman who lives outside society's norms. Watch this heroic samurai epic today!