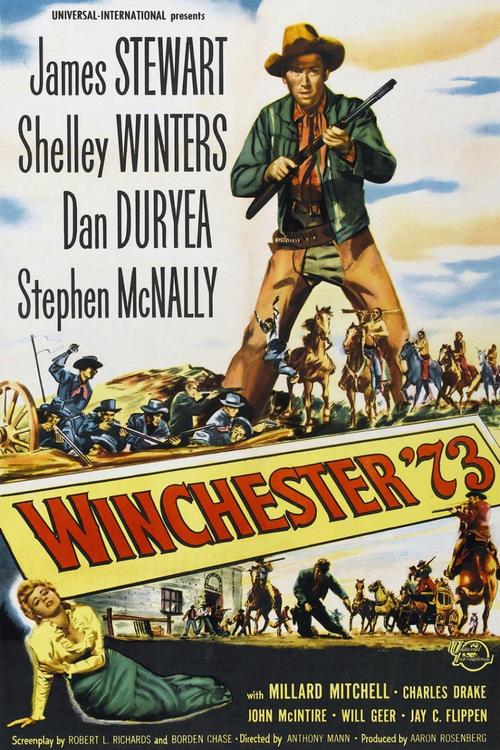 Lin McAdam (Stewart) is roaming the prairies, looking to settle an old score with one Dutch Henry Brown (McNally). Unfortunately, when the two meet up, they're in Marshal Wyatt Earp's jurisdiction and must surrender their weapons. The two compete in a shooting contest for a brand-new Winchester '73 rifle, the finest firearm made. McAdam wins, but through an act of treachery, loses the rifle. McAdam goes after Dutch Henry again, only this time, he wants his rifle back too.

James Stewart wanted a change from his folksy, everyman roles, and in a risky move, chose a western to give his image a harder edge. Director Anthony Mann and he would collaborate on four more oaters after this outing, which proved a huge success. "Winchester" brought a new complexity of character to the Western form, literally resuscitating a fading genre. This role also revived Stewart's career by displaying the actor's impressive range: Stewart's McAdam is a dark, conflicted, angry fellow, far removed from the Mr. Smiths and Elwood P. Dowds of the world. Film also features sterling support from Dan Duryea, Millard Mitchell, and a comely Shelley Winters as a sweet-natured showgirl. Also, look fast for Rock Hudson playing an Indian brave.