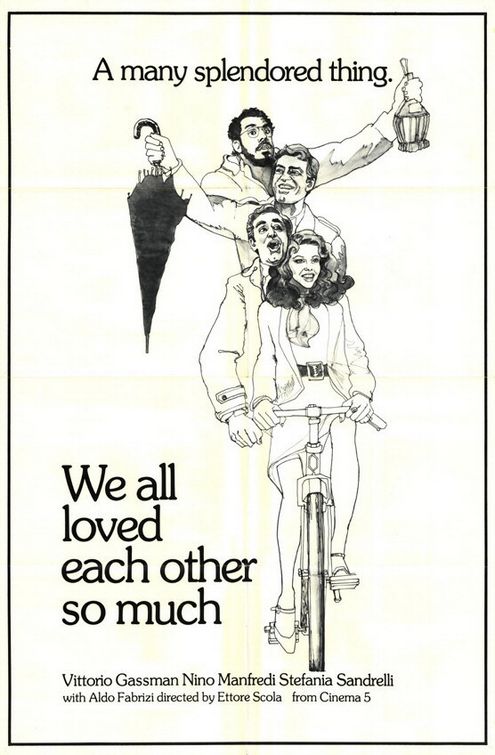 We All Loved Each Other So Much

Scola's film follows the divergent paths of three World War II comrades — Gianni (Gassman), Antonio (Manfredi), and Nicola (Flores) — over 30 years after the conflict ends. Antonio, a male nurse, falls for Luciana (Sandrelli), but on introducing her to Gianni, they fall in love. Time passes, and we see Gianni marry for money, Luciana struggle to become an actress, Antonio demoted from male nurse to stretcher-bearer, and Nicola losing his teaching job over his outspoken views on neo-realist cinema. All the while, director Scola subtly sprinkles the drama with a humorous, light-hearted, philosophical coating that's uniquely Italian.

This unmitigated joy of a film is truly hilarious, even as parts of it break your heart. It follows the progress of a generation, personified in three wartime buddies who drift apart and then briefly converge again. There is failure, heartbreak, regret, but the message seems to be that love and friendship conquer all... as well as the movies themselves, as Scola uses the progression of Italian cinema over this fertile period as warm, wonderful seasoning. (In one memorable scene, Antonio's ambulance is delayed in Rome as Fellini and Mastroianni — in delightful cameos — shoot the famous Trevi Fountain scene from "La Dolce Vita.") Though the quality of the DVD print is not top-notch, it takes little away from all that magic on-screen.

We Are the Best!