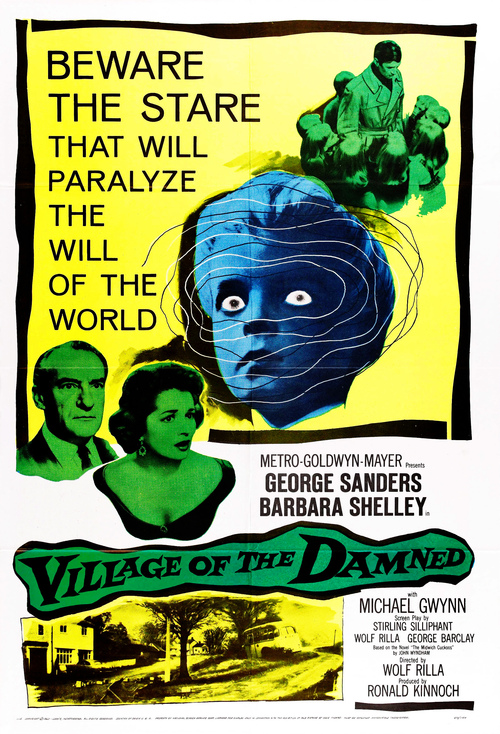 Village of the Damned

On a seemingly ordinary day in a small, rural English village, every resident suddenly and mysteriously falls asleep for a single hour. Several months later, the women of the town become inexplicably pregnant, then birth eerily calm, clone-like blonde children. As strange phenomena and unexplained violent accidents build up around the pack of children, it becomes increasingly apparent that the kids are not all right. Gordon and Anthea Zellaby (George Sanders and Barbara Shelley) are our avatars in this tale of a town gone awry, both as investigators into the strange ways of these children, but also as parents of one of their leaders.

With elegantly precise cinematography and timing meticulous enough to please the unnervingly quiet children who inhabit the film, "Village of the Damned" practically invented the slow burn, fostering a subtly building tension that chills far more effectively than outright violence. The tone and pacing brilliantly reflect the idea of control and mental penetration, and a focus on the terse, sparse dialogue, creates a tight, claustrophobic feel. The performances of the children in the film are uncanny, and George Sanders gives a stunning and distinctly British turn as the suspicious professor. This timeless classic has inspired so many genre tropes, from the sharp, tense score to the bad seed child born evil that it remains a must-see for any fan of horror film. Please note: This classic shares a disc with "Children of the Damned", which is not Farr-approved.