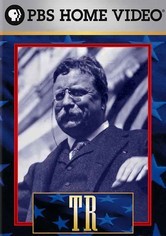 TR: The Story of Teddy Roosevelt

Boisterous, ambitious, combative, and dedicated to driving reform in the Gilded Age, Theodore Roosevelt was one of the fiercest and most fascinating politicians of the early 20th century. Drawing on Teddy's archive of personal papers, old footage, and interviews with historian David McCullough and various family members, Grubin traces Teddy's rise from the nearly fatal asthma that debilitated him in childhood to his becoming both a vainglorious war hero and populist president to a demagogic Bull Moose in his post-White House years.

Part of PBS's estimable "American Experience" series, and narrated by the late Jason Robards, "TR" is the fullest portrait yet of the rough-riding Nobel Prize-winning commander-in-chief. We get a strong sense of the times, as well as Teddy's willful temperament and his contributions to social reform and environmental protection in a period when big industry (and corruption) was going into overdrive. But Teddy was also driven by contradictory impulses: he built the Panama Canal by fomenting a revolution, and, as Vice President, went behind McKinley's back to orchestrate the Spanish-American War. No wonder he was called a "steam engine in trousers!"