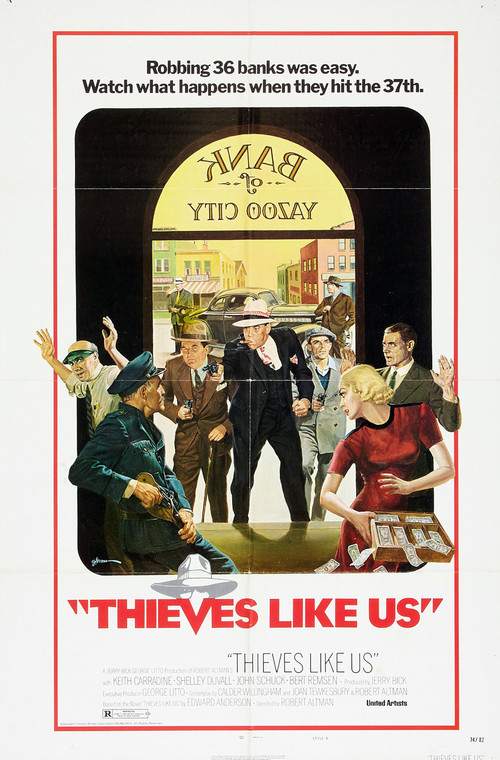 After escaping from a Mississippi prison farm in the 1930's, naive young killer Bowie (Carradine) and his pals, cranky half-Indian Cicamaw (John Shuck) and veteran criminal T-Dub (Bert Remsen) hide out in the rural homestead of T-Dub's in-law, Mattie (Louise Fletcher), to plan a series of bank heists. While the national press whips up a frenzy of overheated prose about their exploits, Bowie pursues comely innocent Keechie (Duvall).

Altman's reworking of the Edward Anderson novel owes its doomed-lovers-on-the-run scenario to another source as well: "Bonnie and Clyde." But Altman is more interested in introspective group studies than shoot'em-up outlaw pictures, and his oddball characters, idiosyncratic zoom-in camera style, and buoyant humor give "Thieves" an altogether breezy, old-timey feel. Shuck, Remsen, and future Oscar winner Fletcher shine in supporting roles, but the heart of the film belongs to Carradine and Duvall's star-crossed lovers. Instead of mythologizing his Depression-era gangsters, Altman humanizes them.