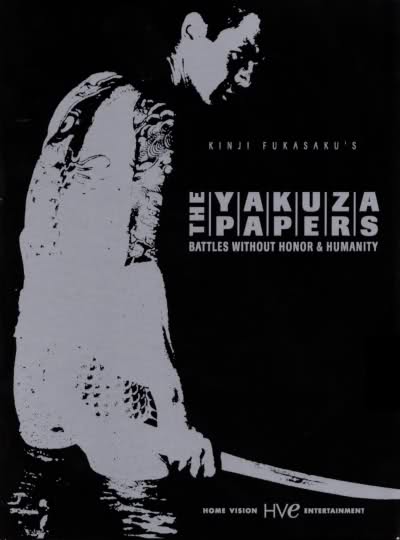 While imprisoned for murder in Hiroshima, former World War II soldier Shozo Hirono (Sugawara) befriends fellow convict Wagasugi (Umemiya). After his release, Shozo joins the mobster's Yakuza gang. But instead of strolling down easy street under the protection of his affiliates, Shozo's gang becomes embroiled in a long, bloody street war with a rival faction. Uh-oh, maybe crime doesn't pay after all.

Aptly subtitled "Battles without Honor or Humanity," this first volume of Fukasaku's notorious “Yakuza” series is a vicious, hard-driving look at life on the mean streets of postwar Japan. Anchored by Sugawara's charismatic performance, "Papers" is packed with plot twists and a stable of fascinating characters, including Nobuo Kaneko as cunning Boss Yamamori and Umemiya as Shozo's comrade-in-illegal-arms. Jittery and propulsive, "Papers" is tailor-made for those who love their crime drama raw and unfiltered. And if you love the first entry, go for the full five film series: spanning ten years of Yakuza mayhem in Hiroshima, this is one long war, and the action never lets up!

The Year of Living Dangerously